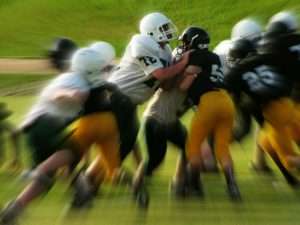 Just in time for the Brain Health Awareness month of March, a new device was recently approved by the Food and Drug Administration that could help reduce the risk of traumatic brain injury during high-impact sports. Authorized for athletes 13-years-old and older, the device known as the Q-Collar can be used during sports like football, soccer, and more. The collar fits around the back of the neck and works by applying pressure to the internal jugular veins of the neck, which increases blood volume in the skull’s blood vessels. The movement of the brain within the cranial space becomes limited, which researchers believe can contribute to reducing the development of a traumatic brain injury.

The FDA oversaw several studies, one of them comparing changes in brain structure between high school football players that wore the device, versus those who did not. Using advanced imaging techniques, researchers would study the brains of athletes before and after practicing. No significant changes to the deep structures of the brain were observed in 77% of participants who wore the Q-Collar during practice. However, 73% of those in the no-collar group were observed to have sustained changes to the deep structures of their brain.

Upon the approval of the device, Q30 Innovations co-founder and co-CEO Tom Hoey said, “FDA approval is the global gold standard for demonstrating the safety and efficacy of a medical device. For nearly a decade, we have invested in world class, independent scientific research conducted by leading academic and medical institutions to bring this novel device to the US marketplace. We thank the team at the FDA for their work and are pleased they have confirmed that that the Q-collar can aid in the protection of the brain from the effects of repetitive sub-concussive head impacts.”

A traumatic brain injury (TBI) can be caused by a forceful blow, bump, or jolt to the head or body, or from an object that pierces the skull and enters the brain. Accidents that involve being struck by or against an object, particularly sports-related injuries, are a major cause of a traumatic brain injury. The National Institute of Neurological Disorders and Stroke estimates that anywhere from 1.6 million to 3.8 million sports and recreation related TBIs occur in the United States annually.

Depending on the extent of damage to the brain, symptoms of a TBI can range anywhere from mild, to moderate, or even severe. Most TBIs that occur each year are mild, which are commonly known as concussions. But in some cases, symptoms can range from a few days, to a few weeks, or even longer. Dangerous symptoms to look out for include:

Traumatic brain injuries cause a wide range of short term and long term changes, affecting one’s thinking, sensations, language and emotion. Disabilities stemming as a result from a TBI can also range depending on the severity of the injury. Because little can be done to reverse the initial brain damage caused by trauma, medical personnel try to stabilize an individual with TBI and focus on preventing further injury.

If you or someone you love has suffered a brain injury due to someone else’s wrongful conduct, you may have the right to compensation through a brain injury claim or lawsuit. The experienced San Diego brain injury attorneys at Berman & Riedel, LLP will help you protect your rights, navigate the complex legal landscape, and fight for the full compensation you deserve for your pain.