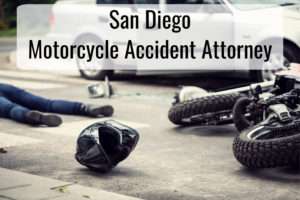 A motorcycle accident can be a frightening, painful, and confusing experience that happens in seconds. As you struggle to get the medical treatment you need, you may be facing an extended period of time without income and your life may be forever changed. Meanwhile, you may be left fighting with an insurance company to get the compensation you need to move on with your life and recover as best you are able. If your accident was caused by a negligent or reckless driver, you deserve compensation to help you rebuild your life.

Berman & Riedel, LLP is a motorcycle accident law firm in San Diego that represents motorcycle accident victims. We aggressively seek full compensation for our clients and take the fight to court when insurance companies will not agree to a fair settlement. Berman & Riedel, LLP has recovered more than $100 million in settlements and verdicts for our clients including $3.3 million and $1.7 million verdicts against negligent drivers.

A phenomenon called scotoma can also contribute to motorcycle accidents. This phenomenon causes drivers to unintentionally ignore motorcycles because the brain has trouble recognizing what it isn’t actively looking for. Most passenger vehicles are watching for other cars and may not see motorcycles approaching. This does not mean the drivers are not responsible for their behavior, however, and this phenomenon can be overcome by drivers who train themselves to specifically look for motorcycles while they drive.

Cars and trucks offer good protection in an accident. Motorcyclists, on the other hand, have almost no protection in a crash and are often thrown from their bike. Motorcyclists are 27 times more likely than people in passenger cars to be killed in an accident, according to the National Highway Traffic Safety Administration. There were 89,000 motorcyclists hurt in crashes in 2017 alone. That’s more than 1,000 injuries for every 100,000 registered motorcycles in the country.

Our San Diego motorcycle accident injury lawyers represent accident victims with all types of injuries including:

Some motorcyclists are lucky and make a full and quick recovery from an accident. For many, an accident means months or even years of painful physical therapy and surgery. Victims who sustain serious injuries may need prosthetics, pain management, multiple surgical procedures, and other treatments. Many face life-long consequences and reduced quality of life in addition to chronic pain and permanent or disfiguring injuries.

To recover compensation for your injuries, it’s necessary to establish who was at fault for the accident. In many accidents, both parties share at least some amount of fault. California allows you to recover compensation even if you were partially at fault but your damages will be reduced based on your share of negligence. This is why establishing fault is so crucial.

Your San Diego motorcycle accident injury lawyer will investigate your accident to uncover evidence that supports your claim. This may include:

This investigation can provide invaluable information. Damage to vehicles and the accident scene, for example, can show how the accident occurred, how fast the other driver was traveling, and the severity of the impact.

Our motorcycle accident attorneys in San Diego leave no stone unturned to uncover evidence to build your claim and prove fault. We may even review the other driver’s social media to provide potential evidence that supports they caused the accident.

How much does it cost to hire a motorcycle accident lawyer?

You do not pay anything out of pocket to get experienced legal counsel after your accident! Our attorneys work on a contingency fee basis and receive a percentage of what they recover. If we don’t recover anything, you pay nothing.

How much is my motorcycle accident injury worth?

Our motorcycle accident attorneys will review your claim and estimate its value. How much your case is worth depends on too many factors including the severity of your injuries, how the accident happened, and your special and general damages.

How long do I have to file a motorcycle accident claim in California?

You have just 2 years from the date of the accident to file a lawsuit in California. Active military members are exempt from this statute of limitations during their service.

Do I need a lawyer after a motorcycle accident?

Many cases involving fairly minor injuries with clear fault do not require an attorney. If you have suffered severe injuries or your case is complicated, a motorcycle accident attorney is always recommended to fight for the full compensation you deserve.

Under California traffic law, motorcyclists must obey the same traffic laws as other drivers. California also has several laws specific to motorcycles. California motorcycle laws are meant to protect riders and others on the road. The most important laws California riders should know include:

Motorcycle accident victims are often left with injuries that will affect them for the rest of their lives. You may be left unable to work or enjoy your hobbies or with disfiguring injuries or chronic pain. California law offers you recourse when someone else is at fault for the injuries you suffer. You have the right to seek fair compensation that makes you as whole as possible.

How much you will recover in a motorcycle accident settlement in San Diego depends on the severity and type of injuries you suffer, your non-economic and economic damages, the nature of the accident, and what your life was like before you were hurt. A San Diego motorcycle accident injury attorney will fight to recover compensation for your:

In some cases that go to court, you may receive punitive damages as well. Punitive damages in a motorcycle accident case are meant to punish the person who is at fault if their behavior was egregious such as driving under the influence.

It’s also crucial to understand another factor that can limit your damages in an accident. The at-fault driver’s insurance policy plays a big role in your claim’s value as it can be very challenging to recover damages beyond the driver’s policy limits.

If you have been offered a settlement by the at-fault driver’s insurance company, make sure you seek legal counsel from an experienced San Diego motorcycle accident lawyer before accepting the settlement. Insurance companies are often quick to make settlement offers when they know their policyholder was at fault or the victim suffered serious (and expensive) injuries. This is an attempt to limit the payout and avoid court-awarded damages.

It’s best to avoid communicating with the insurance company directly on your own. Insurance adjusters will use your statements against you to devalue your claim. An experienced motorcycle accident injury attorney in San Diego will fight for the compensation you deserve and negotiate on your behalf with the insurance company after building evidence to support your claim.

Motorcycle accidents can lead to catastrophic and life-changing injuries and the insurance company is not on your side. If you have faced serious injuries due to another driver’s negligence or recklessness, the San Diego motorcycle accident injury lawyers at Berman & Riedel, LLP will work as your advocates to aggressively fight for the compensation you deserve and hold the responsible party accountable. We will do whatever it takes to build and support your case by:

Contact Berman & Riedel, LLP today to schedule a free consultation with our San Diego motorcycle accident law firm to discuss your legal options and begin building your claim. You do not pay anything unless we recover for you!