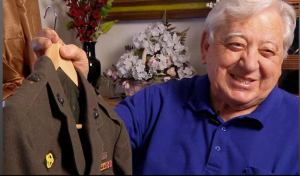 Berman & Riedel associate attorney Lukas Pick shared with us a moving story about his grandfather. Harold Loew, Mr. Pick’s grandfather and a World War II Marine veteran, was recently reunited with his lost uniform, after over 50 years. Mr. Loew’s first time seeing his uniform brought back a flood of memories, and he recounted some of his experiences as a young marine stationed in the south pacific. “It makes me so proud,” Mr. Loew said. “I was just one of a cog in great organization like the Marine Corps.”

The story of how Mr. Loew was reunited with his uniform is also quite amazing. Sometime after the war, Mr. Loew moved from Los Angeles to Las Vegas. During the move, he lost his uniform along with his discharge papers. Many years later, the daughters of a retired Master Gunnery scouted the web for military memorabilia for a father’s day gift. They placed a bid on the uniform and won.

The uniform arrived along with the complete records of the marine who wore it, Hal Loew. Initially, the new owner didn’t think much about the papers until he brought them with the uniform to an ROTC class he was teaching in Texas. The cadets were fascinated by the story the uniform and documents told, and set out to find its original owner. Through some savvy google searching, the cadets tracked down Hal Lowe.

So the uniform was packed up and sent to Hal Lowe in Las Vegas. With it came a flood of old memories, and some new ones about the kindness and interest of another marine, his daughters, and the ROTC cadets.

Watch video footage of Mr. Loew’s reunion with the uniform he’d lost for so many years: http://www.reviewjournal.com/news/recovered-uniform-brings-back-memories-las-vegas-marine-who-served-wwii