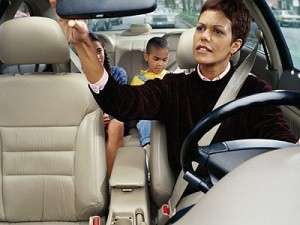 There has been a lot of attention and new laws for using cellphones while driving, though not a lot of police follow through. The National Highway Traffic Safety Administration reports that texting and driving is six times as dangerous as driving drunk, and that 40 percent of all traffic collisions involve a cell phone, according to Automotive Fleet. Texting takes a person’s eyes off the road for long periods of time, while talking on the phone while driving takes the person’s mind off the task at hand (driving and watching out for other road users). Phone and electronic use is a growing problem and untold thousands are injured and killed because of it. However, another, lesser known problem may be growing in the backseat: child occupants. A 2013 study done by Monash University found that driving with children in the car is 12 times more distracting than driving while talking on a cellphone.

Researchers in the Monash study studied 12 families’ driving habits over a three week-long period. The average number of children in each family was two, with ages ranging from one to eight years old. The researchers hid recording devices in each of the family’s vehicle to track the kind of child-induced distractions and how often they occurred. The findings were startling. In 90 out of 92 trips made in total over the three week period, parents became distracted by their children. The most prevalent dangerous driving habit was taking eyes off the road (to look at the child) for more than two seconds at a time. It was found that the parents, on average, would spend over 20 percent of the drive time with their eyes off the road (an average of three minutes and 22 seconds per 16 minute-long trip).

Eyes off the Road, Conversations, and Assisting or Playing with the Child

Talking on the Phone Increases Rate of Crashing by 1.3 Times

The researchers noted that, due to the prevalence of improperly secured children, parents could decrease distractions caused by small children simply by properly restraining them in their carseats. Other tips include having a quiet toy or book for the child to read and using incentives and rewards to keep them calm. Remember, no matter how disturbing a child is in the backseat, turning around to deal with them while the car is in motion is the most dangerous thing you can do.

Contact Berman & Riedel, LLP at 858-350-8855 today to speak with one of our experienced Cincinnati, Ohio, car accident attorneys if you or a loved one has been injured in a traffic accident.