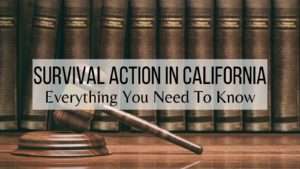 Losing someone you love is never easy. If you believe you may have a claim stemming from the negligent or wrongful death of a loved one, it is important to understand what legal avenues are available to recover damages. Though money isn’t going to bring back the loved one who passed away, it can help pay for those things you lost due to your loved one passing away. In the state of California, there are two separate legal actions that can be filed when someone has passed away due to negligence – Survival Action and Wrongful Death suits. It’s important to understand the differences between these actions, who can bring them, and what kind of damages each one covers.

What qualifies for a survival action suit in California?

Who can file a Wrongful Death Suit?

The statute governing wrongful death suits allows specific parties to bring forth a claim. These parties include:

In the case that there are no surviving persons of the decedent, a wrongful death lawsuit can still happen. However, in this case, it can be much more difficult to get damages awarded. A wrongful death suit may be filed by anyone who would be entitled to the property of the decedent. This is due to intestate succession. This can include:

Furthermore, if the following parties can show that they were financially dependent on the decedent, they may also bring forth a wrongful death action:

What Damages are available in a Wrongful Death Suit?

Damages that are recoverable in a wrongful death action are those that “are just” under the circumstances of the specific case brought forth. These damages fall under two general categories: (1) those expenses which arise for the estate of the decedent as a result of the decedent’s death; (2) and those which are suffered by the family members as a result of the decedent’s death. So, what does this mean? Basically, damages which are often claimed in California under a wrong death action include, but are not limited to things like:

When Should a Wrongful Death Suit be Filed?

Who Can File a Survival Action?

What damages are available in a Survival Action?

Are punitive damages recoverable in a Survival Action filed in California?

Yes, in California, punitive damages can be recovered in a survival action. However, in order to be pursued, the decedent must have sustained an economic loss before death. Case law has held that even minor property losses, like damaging of clothes in the commission of a murder, can give rise to punitive damages. This is thanks to Rufo v. Simpson (2001) 86 Cal.app.4th 573, 616. The purpose of punitive damages in a California survival action is to punish particularly egregious and reprehensible behavior on the part of the wrongdoers and to discourage others from taking similar actions.

The amount of recoverable punitive damages is covered under Neal v. Farmers Ins. Exchange , 21 Cal.3d 910 and based on three main factors:

When Should a Survival Action be Filed?

The statute of limitations on a survival action is different than in a wrongful death suit. It must be brought within two years of the wrongful act, or six months after the decedent’s death, whichever is later.

Should you file a wrongful death suit or a survival action lawsuit?

Because wrongful death suits and survival actions cover different damages, plaintiffs, and have different statute of limitations, it is important to speak to an attorney to find out exactly which actions should be filed. It’s possible for both causes of actions to be filed in the same suit. Our attorneys at Berman & Riedel have vast experience handling cases arising from wrongful deaths and can help you figure out which actions are appropriate in your situation. If you’re looking to file a survival action in California, call us today at 858-350-8855.