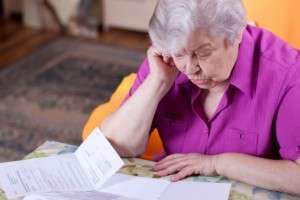 Elder financial abuse is a growing threat to our nation’s older adults. Research suggests that at least 20 percent of adults age 65 and over have been victimized by financial fraud and abuse.

In 2010 alone, reported instances of scams and fraud against older adults resulted in losses of about $2.9 billion. Since most cases of elder financial abuse go unreported, however, aging experts and researchers believe this number is much higher than the actual total amount of money lost to these schemes and frauds. One study by Cornell University suggests that the prevalence rate of elder abuse, including financial exploitation, is some 24 times higher than what is currently reported.

These numbers are expected to grow as the older adult population in the United States swells to a record 71 million people over the next few decades. With many older adults living on limited incomes, a massive financial loss due to fraud could plunge them into financial, physical, and psychological trauma.

The disruption to their financial stability can push many older adults onto already-stretched-out federal and state support programs, cause them to lose their homes, and the stress and depression that can be triggered by their victimization can impair their mental and physical health. The current level of awareness and prevention education is not adequately halting the threat of elder financial exploitation and more needs to be done to protect the hard-earned savings of our nation’s older adults.

Why older adults are targeted

Older adults have, sadly, become a major target of fraud and scams, perpetrated by a variety of individuals — from strangers to their own children. Older adults are seen as a profitable and easy target. As a population, older adult households have 47 times more wealth than their younger counterparts.  Many own their own homes outright and have secured a lifetime of savings in their bank accounts.

Many older adults are generally more trusting of others; part of it is cultural as they grew up at a time when etiquette required responding to a polite inquiry or plea from a stranger. These earlier generations do not approach financial advice or suggestions from telemarketers, advertisers, and even known acquaintances, with the same skepticism that younger people do.

Another element influencing trust levels concerns how cognitive assessment of certain situations changes over a lifetime. Recently, researchers at UCLA determined that older brains do not pick up on social cues indicating that someone is lying or that something in a situation may be “off.” The social isolation that many older persons deal with can also contribute to a willingness to engage in a conversation with an unscrupulous person. Unfortunately, these factors make older adults attractive targets for strangers, professionals and even family members who hope to make an easy profit at the expense of an unknowing older adult.

Elder financial abuse appears to fall into three types of crimes: occasion, desperation, and predation. Crimes of occasion or opportunity are incidents of financial abuse or exploitation that occur because the victim is merely in the way of what the perpetrator wants. Crimes of desperation are typically those in which family members or friends become so desperate for money that they will do whatever it takes to get it. Many of these family members are dependent on the elder relative for housing and money. Finally, crimes of predation or occupation occur when trust is engendered for the specific intention of financial abuse later. A relationship is built, either through a bond of trust created though developing a relationship (romantic or otherwise) or as a trusted professional advisor, and then used to financially exploit the victim.

The specific ways that older adults are deprived of their financial security by strangers are many, and growing. Some of the more common schemes are:

Trusted professionals can also drain an older adult’s account through methods such as:

Friends and family members are often trusted to help manage an older adult’s finances and may abuse that role by using methods such as:

Older adults are typically less able to cope with financial setbacks due to their fixed income, and some may turn to federal and state benefits to cover daily expenses. In some cases, victims of elder financial exploitation lose not only their savings but their possessions, including their homes – homes where they have lived their entire adult lives. Many of these victims see very little of their money returned even if the perpetrator is caught. Unlike younger victims of financial fraud, older adults do not have the working years ahead of them to recoup those losses. The stress and shame that victimized older adults feel leave them emotionally traumatized, affecting their physical and mental health.

Underreporting of elder financial exploitation is a huge concern, as it hinders the ability to see and react to the extent of the fraud and scams facing our nation’s elders.

While Elder Financial Fraud has been an issue for years, there is renewed interest due in part to the creation of the Consumer Financial Protection Bureau. Philanthropic efforts on elder financial abuse tend to focus on research and education for consumers and caregivers. Recent examples include:

The Retirement Research Foundation in 2012 made a one-year grant in the amount of $45,000 to the National People’s Action in Chicago, Illinois. The grant helps NPA continue an advocacy campaign to end predatory lending practices targeting older adults.

Other avenues that could be explored by grantmakers include educating banks and other financial institutions about ways to help prevent financial fraud and abuse targeted toward older adults.

The effect of payday loans
Payday loans and direct deposit advances are short-term loans with high interest rates. Many of these products cannot be repaid in installments and do not take into account a customer’s ability to repay. As a result, when the loans come due in full with interest, in about two weeks, customers may end up taking out another loan to pay for expenses, thereby becoming trapped in a cycle of debt. While there is acknowledgment of the negative effect of payday loans and direct deposit advances on the public in general, there have been very few initiatives that directly look at their effects on older adults living on a fixed income. Since many older adults receive regular Social Security payments, they are often targeted by originators of these loans.
Recent projects and research on this issue include:

There are still major financial institutions that encourage advance loans that have predatory features for low-income individuals, resulting in considerable hidden costs and fees.  Grantmakers could withdraw their deposits and funds from banks that continue to offer and/or support payday lending practices.  This includes some of the major financial institutions, and a policy from a grantmaker against payday lending would be a positive outcome, and potentially influence bank behavior.

Financial education for older adults and caregivers
In response to the recent rates of financial exploitation of older adults, there has been an increased focus on providing older adults and their caregivers with tools and education to avoid financial fraud and abuse. The Consumer Financial Protection Bureau, the Federal Deposit Insurance Corporation’s Money Smart for Older Adults and the Bank of the West’s Be Aware program are examples of initiatives aimed at reducing the prevalence of fraud and abuse.

The Department of Treasury’s decision to go paperless affects older adults receiving Social Security payments, and other disability payments. This transition poses increased risks for older adults, including identity theft, fees on prepaid cards, and an increase in scams. Many older adults have already faced significant losses as a result of the transition.

The Office of the Inspector General and Consumers for Paper Options are some of the organizations that have expressed concerns about the issue. Funders, who are supporting asset building and financial access initiatives such as Bank On campaigns, should ensure that resources are targeted to assisting older adults sign up for direct deposit with a legitimate financial institution. Direct deposits will minimize the identify theft, scams, and hidden fees that victimize older adults who do not have direct deposit accounts. The number of older adults who are unbanked is growing, and that needs to be rectified.

The BITS Financial Service Roundtable released a publication in 2010 entitled Protecting the Elderly and Vulnerable from Financial Fraud and Exploitation, which, among other things, discusses the role of financial institutions in combating elder financial abuse.

The Government Accountability Office released research findings on Strengthening Efforts to Combat Elder Financial Exploitation (2012) and in 2013, published a statement from Kay E. Brown, Director of Education, Workforce, and Income Security, titled “Federal Government Has Taken Some Steps but Could Do More to Combat Elder Financial Exploitation.”

Original article can be found at http://www.giaging.org/issues/financial-exploitation/