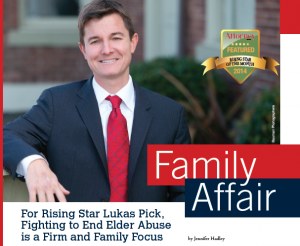 Congratulations to Berman & Riedel attorney Lukas Pick! Mr. Pick was featured in the April edition of the San Diego Attorney Journal as this month’s “Rising Star”.

For Rising Star Lukas Pick, Fighting to End Elder Abuse is a Firm and Family Focus

“There’s not much to do with an English degree,” Lukas Pick says with a chuckle when reflecting on how he first became interested in pursuing a law degree. “I decided I’d give law school a try,” he adds. To his pleasant surprise while attending the University Of San Diego School Of Law, his love of reading and writing made law a natural fit. “I loved the legal reading and writing and I fell in love with torts. The idea of representing individuals against big companies really appealed to me,” he says. He decided to forge a career as a plaintiff’s attorney.

However, when Pick graduated from law school in 2007, suffice to say it wasn’t a particularly robust hiring market. “Although I always wanted to pursue plaintiff’s work, I was only able to find work with a defense firm out of school, handling medical malpractice lawsuits. I worked with some great attorneys and gained valuable experience, but I quickly became tired of dealing with what I perceived to be insurance companies who only wanted to save money as opposed to adequately compensate victims for their injuries,” he says candidly.

As such, when the opportunity arose for Pick to join Berman & Riedel, LLP, as a plaintiff’s attorney representing victims of nursing home abuse and neglect and victims of catastrophic injuries, he breathed a huge sigh of relief. “I know how insurance companies think, so I now get to use that experience, knowledge and insight I gained as a defense attorney in helping individuals who have been harmed.” Indeed, these days, a full 75% of Pick’s work entails fighting for the rights of victims of nursing home abuse and neglect cases, while the remainder of his work involves fighting for the rights of those who have been victims of catastrophic injuries.

Pick’s interest in working on behalf of elders and their families was further fortified by his own family. “I have a unique perspective on our cases against nursing homes and assisted living facilities. Having grown up living with my grandparents at times, I value our elderly and the contributions they have made to society.

I believe we all owe them a duty to protect them and ensure they are properly cared for as they age,” Pick says. Continuing he adds, “My grandparents now both reside in assisted living facilities. I understand the trust that residents and families must put in these facilities. I also understand that no matter how diligent family members are, ultimately we are relying on the facilities to be responsible and care for our loved ones. I understand the struggles people face in wanting to care for their family members at home, but often are unable to, and have to trust a facility to care for them instead. I think this allows me to identify with our clients who have had family members in nursing homes and assisted living facilities,” Pick says. “Each nursing home case I deal with truly affects me as a person,” he adds.

In addition to his own experience in helping his grandparents to transition in assisted living, another close family member of Pick’s is also actively involved in fighting for nursing home reform, and dedicated to preventing elder abuse. “My wife Paige is involved in a local organization named Stand Up For Rosie which is part of a coalition of organizations attempting to improve laws governing residential care facilities for the elderly to ensure our older population is protected from abuse and neglect. We both support local elder advocacy organizations including Hazel’s Army, Consumer Advocates for RCFE Reform (CARR), and Elder Law & Advocacy,” Pick says.

“In addition to holding nursing homes and residential care facilities responsible for the mistreatment of residents through civil litigation, I am committed to ensuring that new laws are also implemented to protect the elderly. Litigation is not just about pursuing money. It is about holding facilities and corporations accountable and protecting individuals from future harm,” Pick says.

Indeed when it comes to holding nursing homes, corporations or insurance companies accountable, Pick is always up for a fight. “I love trials. I think you can be very aggressive, but still professional during litigation. I believe in pushing cases as hard as possible,” he says.

For example, in two recent cases where Pick served as second-chair with founding partner Bill Berman, the verdicts obtained made the defense’s top offers look like pennies. In the first, which resulted in a $1.7 million jury verdict, the defense counsel had maxed out their offer at $100K. Similarly, in December of 2013, Pick and Berman obtained a jury verdict of over $1 million after refusing defense counsel’s offer of $200K.

“My firm’s focus and my family’s focus on changing the laws are incredibly important to me. I think it is important that all people understand that they can help ensure our elderly are protected by supporting local organizations and proposed laws. For example the Residential Care Facilities for the Elderly (RCFE) Reform Act of 2014 includes more than 14 new bills that are designed to protect elders, and provide greater disciplinary actions for facilities who break the laws,” Pick says.

“The good news is that the RCFE Reform Act has bipartisan support. It seems like everyone is pretty much on board,” he adds. And with good reason. Amongst other things the RCFE Reform Act of 2014 “would require the state to increase inspections from once every five years, to closer to once per year,” Pick says. Moreover, as opposed to the “existing slap on the wrist fines residential care facilities receive, the Act proposes to increase fines substantially, which will make it a real deterrent for those facilities not to comply with laws and regulation.” Picks says. Additionally, “the RCFE Reform Act of 2014 will require all residential care facilities to carry liability insurance, which they are currently not required to do,” he adds.

Clearly for Pick, protecting the elderly is not just part of his life, it is his way of life, and he sees a long future ahead of him in the field. “I hope to continue to fight against nursing home abuse and neglect and promote changes in laws to ensure that our elderly are protected. I also hope to try more cases against skilled nursing and assisted living facilities to hold them accountable for wrong doing,” he says.

As far as Pick’s grandparents are concerned? “They are great. It has been safe for them. But everyone who works there certainly knows what I do for a living,” he says with a smile. “I want to help make sure everyone’s grandparents will be safe at these facilities.